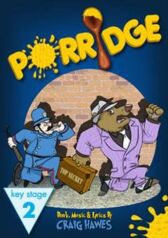 Large Mixed Cast
"Once upon a crime ..."

A huge crime wave hits Happy Valley and soon there's a caseload of mysteries to be solved!

Who kidnapped Marigold the cow?

And what dirty secret is Papa Bear hiding behind his Porridge empire?

It's down to Private Detective Jack Spratt to uncover the terrifying truth in this tale of mystery, mayhem and breakfast cereal!

Porridge has all the ingredients of a delicious production - packed with spoonfuls of sparkling songs and bowlfuls of belly-laughs, this hilarious show will leave your cast and audience wanting seconds and shouting for more!

Easy to stage and costume

Click the Speaker and listen to a Sample of the Songs ...

Once Upon A Crime

It's Up To You

While The World Is Sleeping

"A clever story, hilarious script and fabulous songs that our whole school loved performing. The parents and pupils are still talking about it - a spectacular success!" ~ Joanna Hall, Head Teacher

For a CD of Backing Tracks + Sound Effects, click here

The CDs include Overture, ALL Songs, Special Effects, Play Ons and Play Offs in the order you need them enabling production and direction to take place without specialist musical expertise