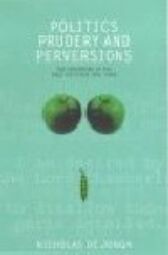 The secret legacy of the Lord Chamberlain's office uncovered for the first time. This book was the winner of the Theatre Book Prize awarded by the Society of Theatre Research in 2001

From 1737 until 1968 any play scheduled for performance in England was subject to censorship by the Lord Chamberlain's office. Before going into rehearsal and receiving a license to perform any script had to be submitted, read and its contents approved

After questions in the house, the practice was finally abolished by an unwilling Wilson government over a cause célèbre involving the plays of Edward Bond.

Nicholas de Jongh, the first journalist to look at the Lord Chamberlain's file on stage censorship when it was opened to the public scrutiny in 1993, gives a savage and often comic account of state control that 'blue-pencilled' any play which was too frank or outspoken about sex, politics and attacks on the crown

From the plays of Ibsen and Arthur Wing Pinero at the start of the century to those of John Osborne and Edward Bond in the 1960s, de Jongh relates an engrossing tale about how the detrimental, and often farcical, prohibitions left an indelible mark on decades of English drama