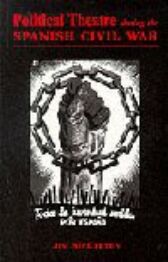 Published by University of Wales

In the charged atmosphere that followed the end of the Civil War, many texts were destroyed and others were locked in archives which were inaccessible during the dictatorship.

This inaccessibility and a basic misunderstanding of the nature of the plays has led to undeserved critical neglect. In these plays, the ambiguity and implication of more `traditional' Spanish theatre were displaced by a factual starkness intended to appeal directly to the spectator and to nurture the ideal Republican combatant and citizen

Presented by mobile troupes, they were performed in a range of locations: streets, village squares, hospitals, barracks, factories, and sometimes at the battlefront