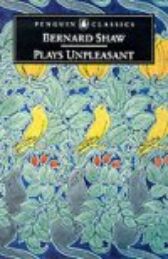 'I had no taste for what is called popular art, no respect for popular morality, no belief in popular religion, no admiration for popular heroics'

With Plays Unpleasant, therefore, Shaw broke all the rules governing how a playwright should entertain his audience

When he realizes that her father is a slum landlord, Harry questions whether he and Blanche have a future together

Charismatic Leonard Charteris is The Philanderer who proposes marriage to Grace, while still involved with the beautiful Julia Craven

But Julia is not inclined to surrender him so easily

In Mrs Warren's Profession, Vivie discovers that her mother's immoral earnings have paid for her genteel upbringing

Will she be able to accept her mother for herself?