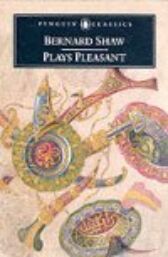 'Soldiering, my dear madam, is the coward's art of attacking mercilessly when you are strong, and keeping out of harm's way when you are weak Get your enemy at a disadvantage; and never, on any account, fight him on equal terms'

One of Bernard Shaw's most glittering comedies, Arms and the Man is also a burlesque of Victorian attitudes to heroism, war and empire

In the contrast between Bluntschli, the mercenary soldier, and the brave leader, Sergius, the true nature of valour is revealed

The is the definitive text, under the editorial supervision of Dan H. Laurence with an Introduction by W. J. McCormack

The last play in the Collection is You Never Can Tell, an exuberant farce, which turns on the chance reunion of a divided family

While Plays Pleasant were intended by Shaw to be gentler comedies than those in their companion volume Plays Unpleasant, their prophetic satire is still sharp and provocative today

As W. J. McCormack writes, 'There is amusement but also unease. His wit unsettles us'