Plays of Science and Invention 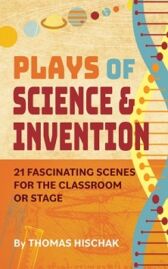 Subtitled, 21 Fascinating Scenes for the Classroom or Stage, the short plays in this collection seek to humanise science by looking at advances from the point of view of both famous and unknown men and women

Going as far back as the ancient world and continuing into the modern age, this Anthology explores various branches of science

From physics and medicine to astronomy

Each play runs between eight and ten minutes with a cast size of two to five characters, and has simple costume, prop, and set listings

Especially ideal for Middle and High Schools, the stage directions and production notes help students visualize the scene, even if simply being read in class.

The “Background” before each play gives information about the scientist, that particular aspect of science, or the historical context of the drama to follow

And the “Aftermath” concludes each play, explaining what happened after the moments captured in the drama and how the events of the play fit into the world of science and history as a whole