Plays for Today by Women 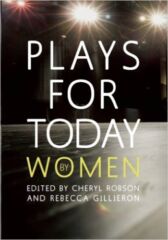 A wide ranging collection of plays by women dealing with contemporary subjects such as child abuse, recession, war, poverty and the complexity of modern women's lives

Suitable for study, for performance, or as part of Women's Studies or Feminist Theatre Studies courses, they have all been produced and performed to acclaim

The six plays in the Anthology are ...

FOR A BUTTON ~ Rachel Barnett

A comic two-hander about two friends and the lengths one will go to, to remain 'best' friends

YOURS ABUNDANTLY, FROM ZIMBABWE ~ Gillian Plowman

FROM THE MOUTHS OF MOTHERS ~ Amanda Stuart Fisher

In a rundown park, two teenage runaways Tazeem and Nosheen hang out, chatting to the boys and an old bag lady, trying to reconcile being British with their Pakistani cultural traditions