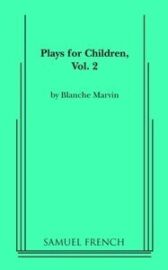 The eleven short Plays for Children in this Collection are ...

The well known characters move, dance and sing their way through Wonderland in the manner of Italian street players from the commedia dell'arte

The story of Scheherazade is retold here in Kabuki style. Animals and birds are interchanged with humans. Symbolic use of scenery and dance movements defines the style

The classic fairy tale told in the style of British pantomime

A classical Biblical story, Crowning Glory tells the story of Esther and how she became Queen of Persia. Her courage saved the life of her uncle Mordecai and all the Jews of Persia, an event remembered in the celebration of Purim

A parody of medieval morality plays, this delightful version of the classic tale incorporates comedy traditions from Moliere to Giraudoux

Set in the post Civil War period and written in the comic minstrel style, this unusual version of the tale of the little tailor who leads the conquest of giants incorporates shuffle and soft shoe dances. Fun lies in the identity of the giants

This comedy for children is based on the play Harvey. Two children uncover the pagan basis of Easter and convert their parents with the help of Mr Easter Bunny

This version is a parody of Chekhov's Cherry Orchard that shows a child's confusion when faced with the adult world. Adults become animals with colors and dispositions matched from human to animal. The Prokofiev score is incorporated in its entirely throughout the second act

Based on Pirandello's Six Characters in Search of an Author, this version of Pinocchio has a group of actors appear and cast the play in front of the audience. Costume decorations transform them into different characters before the children's eyes

Modeled on Restoration comedies, this play features a shy and absent minded Prince who is browbeaten into marrying the Sleeping Beauty who is 100 years his senior. The children in the audience lend him a hand while good and bad fairies deal with the politics of the day and the gossips of the court vie with each other telling scandal