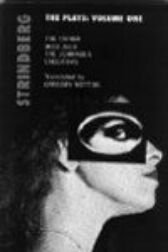 Miss Julie is Strindberg's best known play, a naturalistic drama about an affair which involves a brutal struggle for ascendancy between the two sexes and two classes

The Father, an almost entirely one-sided rage against the power of women over men, is also a plea for the feminine side of a man's nature

In Creditors, Strindberg is in rare comic form, describing how a woman's ex-husband gains her new husband's confidences, only to destroy him and his faith in his wife in one afternoon