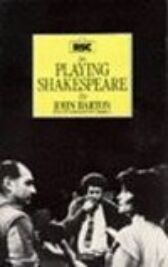 In the first half of the book, Barton attempts an objective analysis of how Shakespeare's text actually works, examining the use of verse and prose, set speeches and soliloquies, language and character

In the second half he concentrates on the more subjective areas such as irony and ambiguity, passion and coolness

Useful for actors and scholars, this book will also aid teachers and students working on Shakespeare's plays in the classroom

"One of the sanest, wisest, and most practical volumes I have ever read about Shakespeare" Michael Billington (The Guardian)