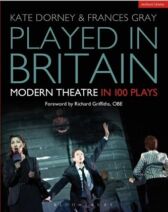 Published in collaboration with the Victoria & Albert Museum and fully illustrated with photos from the V&A's collections, this explores the 100 best and most influential plays from 1945 to date

Opening with J. B. Priestley's classic play from 1946, An Inspector Calls, and ending with Laura Wade's examination of class privilege and moral turpitude in Posh over 60 years later, Played in Britain offers a visual history of post-war theatre on the British stage

Arranged chronologically the featured plays illustrate and respond to a number of themes that animate post-war society: censorship and controversy; race and immigration; gender and sexuality; money and politics

An essay on each period first sets the context and explores trends, while the commentary accompanying each play illuminates the plot and themes, considers its original reception and subsequent afterlife, and finishes by suggesting other plays to explore

Photographs from the V&A's extensive collection illustrate each play, providing further insight into stage and costume designs, and include iconic images from the premieres of major plays such as Waiting for Godot and Look Back in Anger

Illustrated throughout with stage production photography, Played in Britain presents a unique and visually stunning panorama of key dramatic works produced in Britain over the past seventy years, throwing a fresh light on the impact, aesthetics and essence of these key plays

"For a theatre-buff-in-training, this is an extremely enjoyable and attractive book" ~ Rachel Creaser, Teaching Drama

"A lavishly-illustrated and fascinating book . . . A treat for theatre-lovers, and I can't think of a better way to introduce interested students to the history and range of drama in Britain. Recommended - and extremely pleasurable - reading." Gary Snapper, Editor, Teaching English, NATE

"Perhaps the only thing about witnessing first-hand a great theatre performance is reliving the experience by reading about it. Here's a terrific coffee-table book offering 100 memorable plays staged throughout the UK since 1945. Familiar classics such as Waiting for Godot, Look Back in Anger, and What the Butler Saw are included, but the bulk of the book offers details about lesser known shows that only the most attentive, post-War British theatre enthusiast might know" ~ Larry Jaffee, The Huffington Post