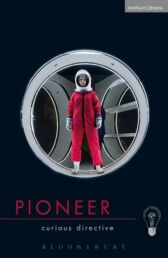 "We have all stared up at the stars and desperately tried to put into words what it is that we are feeling. This mission is an articulation of that wonder"

... the first human mission to Mars has disappeared without a trace

... a reclusive Indian billionaire has funded Ghara I, a new attempt to achieve this dream

... in Siberia, two Russian brothers reconnect by driving a Lada Sputnik 1.3 in search of the birth of space travel

... at the bottom of the Pacific Ocean, Maartje holds on to a secret about her sister

And on Mars, Imke and Oskar - a young Dutch couple - are mysteriously separated

"We tend not to see much science-fiction on stage. It's a genre more readily associated with literature, film or television, where the available scope is much wider. Curious Directive, however, make a strong case for its theatrical viability in Pioneer, their impressively expansive new look at space exploration and human progress ... Pioneer has a remarkably well-honed aesthetic. The key to convincing sci-fi on stage, it would seem, is simplicity ... Both intellectually and theatrically assured ~ Whatsonstage

"A thoughtful show that moves confidently between the wastelands of Siberia, deep-water research at the bottom of the ocean and into space itself as it celebrates the human hunger for discovery" ~ Guardian

Their work addresses the role that science plays in everyday life

They aim to create accessible and innovative science/theatre experiences which encourage its audiences to be curious about the world, peering through the lens of science

This book, like the show itself, is stylishly designed, and features photographs outlining the devising process that curious directive follow when putting their shows together