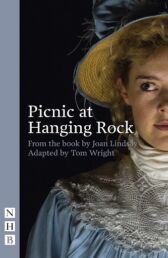 Escaping their teacher's watchful gaze they absconded, away from the group and towards the beckoning Hanging Rock

Never to be seen again

Now in Tom Wright's chilling stage adaptation, an all-female cast of five struggle to solve the mystery of the missing girls and their teacher

And once again euphoria and terror reverberate throughout Appleyard College, as the potential for history to repeat itself becomes nightmarishly real

This spine-tingling adaptation of Joan Lindsay's cult novel (famously filmed by Peter Weir) was a huge hit when it premiered at Malthouse Theatre, Melbourne, Austrailia

Emotion, violence and meaning bubble up like magma mythic in its scope and magical in its appearance ... an evocative adaptation that finds horror not in nature, but in the civilising class ~ The Stage

Gripping ... The play becomes a vision of psychological breakdown as a prettified illusion is ripped apart by the raw force of nature. It's a show with a volcanic power ~ Guardian