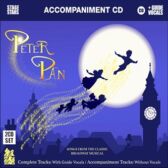 The original 1954 Broadway production of Peter Pan won a Tony Award for its two stars - Cyril Ritchard, as Captain Hook, and the legendary Mary Martin, as Peter Pan

Adapted from J.M. Barrie's 1904 play and his novel Peter and Wendy, this musical adaptation shares the adventures of Wendy, John and Michael Darling, as they join Peter and Tinkerbell on a trip to Neverland

In Neverland they come face to face with a ticking crocodile, a fierce Indian tribe, and a band of bumbling pirates

THIS 2-CD ALBUM FEATURES 14 SONGS FROM THE BROADWAY MUSICAL

Each of the 14 songs appears on the album twice

I Won't Grow Up

NOTE: This album is a re-recording of the Broadway musical version - it does NOT feature songs from the Disney cartoon adaptation