Period of Adjustment or High Point is Built on a Cavern 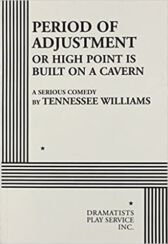 Tennessee Williams called Period of Adjustment 'a Serious Comedy' and in so doing he put his finger on its most unique aspect, for this is a work which combines a humorous viewpoint with deep-seated concern for a very real, human situation

One couple has just broken up after five years together

The play examines the sources of the crisis

George Haverstick, a war buddy who unexpectedly visits him on Christmas Eve with his bride of a day, has the shakes - his difficulty seems to be a fear of impotence

The end is happy, as comedy requires

The four go to bed

In the right combinations!

There are lines that sparkle with freshness of insight. There are scenes that erupt with laughter. There are affecting passages of barely articulated tenderness ~ NY Times