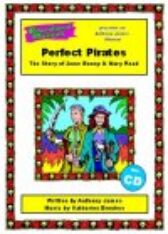 Very quickly Anne falls for Jack and joins him, dressed as a man, for a life of piracy on the high seas

While aboard Jack's ship the Revenge, Anne learns the amazing truth about Jack's Lieutenant - the disguised Mary Read

Together they vow to be the best pirates ever

Meanwhile, in New Providence, the Governor has been charged by the King to end piracy and Captain Barnet is dispatched to capture the Revenge and bring all aboard her to justice ...

I'm Not What I Seem - Mary Read & Anne Bonny

At Sea - The Pirates