People Where They Are 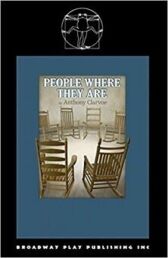 On a Tennessee hilltop, heroes in training meet in secret

"In the spring of 1955, much of the Southern US was a simmering kettle of racial segregation, civil rights repression, and worker/workplace abuses - one that was on the verge of boiling over into a full scale struggle against those economic and civil rights injustices

With that time and atmosphere of conflict as a starting point, in People Where They Are, playwright Anthony Clarvoe has focused in on the rural Grundy County of 1955 Tennessee and the organization known then as the Highlander Folk School

While the story of Highlander and its goals of educating and agitating for change may be an unfamiliar or misunderstood one among today’s audience, Clarvoe has succeeded with a superbly compelling narrative that reveals and explains

Most importantly, he draws important parallels between the racial and socioeconomic struggles of the 1950s and 60s and similar issues that face contemporary American society such as immigration, voter suppression, and LGBTQ rights

The storyline of People Where They Are is constructed around an educational session at the Highlander Folk School in the pre-Montgomery bus boycott days of 1955, involving four invited, outsider ‘students’ along with the group leader, Mrs Clark and a helper, Mr Carawan. based on the real-life Septima Clark and musician Guy Carawan

The visitors are May, a mountain housewife turned labor organizer, Emma, a Mexican-American suffering from ethnic and class abuse, Ned, a compromised white man from the Atlanta office of the CIO, and John, a northern black man who presents himself initially as the son of a minister

As their session moves into a second day, personal stories begin to flow and character complexities emerge allowing each actor to paint a portrayal that not only reveals their character, but ties in subject matter relevant to a present day audience …

While I rarely make such a direct and obvious recommendation, I am suggesting that all theatre-goers place People Where They Are on their must-go list …