Parramatta Girls & Eyes to the Floor 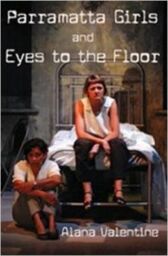 "Upwards of, and possibly more than 500,000 Australians experienced care in an orphanage, Home or other form of out-of-home care during the last century. As many of these people have had a family it is highly likely that every Australian either was, is related to, works with or knows someone who experienced childhood in an institution or out-of-home care environment" ~ Forgotten Australians, Senate Committee Report, August 2004

When girls at the Parramatta Training School rioted in 1961, a special, more punitive institution was set up in a disused psychiatric hospital in Hay, in remote Western NSW

Redesigned to house the ten 'worst' girls in the State, the Hay Institution for Girls became both a threat to maintain order in Parramatta and a site of further degradation and psychological torment for the young women it housed

Forced to constantly keep their 'eyes to the floor', these girls were not allowed to speak to each other and were forced to lay and then break up concrete paths, scrub paint from walls and tend the institution's garden

The inmates of Girls Training School, Parramatta had about as hard an upbringing as you can get in Australia

Based on the testimony of dozens of GTS old-girls, this vibrant play is a joyous and harrowing dramatisation of the experiences of eight inmates and their reunion forty years later

Interspersed with song and storytelling, this is a tribute to mischief and humour in the face of hardship and inequality The inmates of The Girls Training School, Parramatta had about as hard an upbringing as you can get in Australia. But theirs is also one of the great untold stories of making good in tough times.

Eyes to the Floor

Chronicles the experience of girls sent from Parramatta Girls Home to the Hay Girls Home for even more brutal, punitive treatment

Written to be played by young adults, this moving work emphasises the childlike vulnerability of the inmates in a world where they must find connection with each other in order to to survive

Artfully woven with movement, chorus work and poetry, it is a compelling companion work to Parramatta Girl