Palestrina and Other Plays 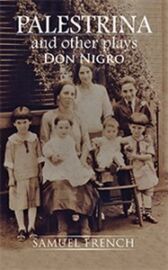 Becky Reedy sits on the porch step of the Palestrina house in Armitage, Ohio, in the autumn of 1946, having just been sick from too much wine and lasagna. She is not making a very good first impression on her boyfriend's Italian mother, a tough woman who supported her family through the Depression by making bathtub gin. Two very different women, one who has devoted her life to her children and one who is lonely, defiant and doesn't like her children much especially after her first husband hung himself in the barn struggle to communicate

In 1902 Inspector John Ruffing, who also makes appearances in Ravenscroft and other plays, is confronted by his most disturbing case: a young woman in an old sanitarium outside London who refuses to speak. His task is to find out what happened to her. Uncovering her horrifying secret draws him into the darkest corner of his soul

Van Gogh sits in the rain on a park bench in the shadow of a windmill. A Dutch girl wearing wooden shoes and carrying a pail of clabber joins him. She is obsessed with tulips and all things Dutch. He is hallucinating and gives her a little wooden coffin which contains what looks like a small dried apricot, but is actually his ear. Then this play begins to get weird as he has a strange vision just before he dies

A bench. The mad Shakespearean scholar Delia Bacon has devoted her life to proving that his plays were actually written by her namesake, Francis Bacon. Ignored by all, she talks her way into Shakespeare's tomb and intends to spend the night digging up evidence to support her contention. She does not expect the bard himself to appear, or other snobs and cretins who can't believe a poor actor from Stratford could have written such plays