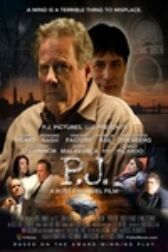 In modern day New York City, Charles is walking along a street when two cars collide in a fiery accident

He is compelled to rush forward when he sees a small child, trapped in the back seat of one of the vehicles

In a moment of extra-ordinary strength, he tears off the car door and saves the child's life

When Charles wakes up from what he thinks is a dream, he is in a hospital in Manhattan and he can't remember who he is or anything about his life

The play begins with Charles, in a straight-jacket, seated in the down stairs office of Dr Shearson, Head of Psychiatrics, while Burt, the doctor's assistant, is on the office phone collecting from his bookie

The rest of this intense mystery/thriller is spent discovering the lost strings of Charles complicated mind and how he ultimately ended up in a hospital where no one knows where he is, including himself

He only finds his lost life through the efforts of Dr Shearson, his assistant Burt and Shelly, Charles ex-girl friend, who is discovered as the link to Charles past and possibly to his present condition

P.J. is a drama which pits the Medical association and all of it's history against the metaphysical and supernatural world of P.J. - the man known as Charles who can't remember his name

Is Charles a human, receiving special instructions from a very real God or is Charles a young, deluded man whose personality has split under the pressure of his faith fighting against his real life

P.J. was the recipient of the Best New Play Award from the Denver Theatre Critics in 1988