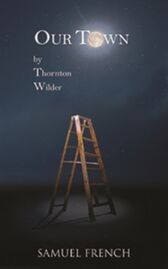 Described by Edward Albee as "... the greatest American play ever written", the story follows the small town of Grover's Corners through three acts ...

Narrated by a stage manager and performed with minimal props and sets, audiences follow the Webb and Gibbs families as their children fall in love, marry, and eventually - in one of the most famous scenes in American theatre - die

"Beautiful and remarkable one of the sagest, warmest and most deeply human scripts to have come out of our theatre ... A spiritual experience" ~ N.Y. Post

"No American play describes more powerfully how we imagine ourselves" ~ N.Y. Daily News

"No play ever moved me so deeply" ~ Alexander Woolcott