Our Teacher's a Troll 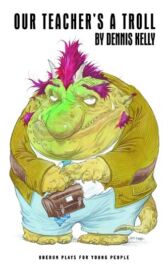 Once upon a time, not so very long ago, there were two terrible twins called Holly and Sean who got up to all kinds of mischief

Once upon a time, not so very long ago, there were two terrible twins called Holly and Sean who got up to all kinds of mischief

In fact, they were so badly behaved at school that the Head Teacher, Mrs Spike, had a nervous breakdown and was found in the sand pit eating sand and mooing like a cow

The twins were extremely pleased with themselves

That is, until the new Head Teacher arrived

You see, the new Head Teacher was a -

Can Holly and Sean save the day and stop the Troll from eating their classmates and Teachers?

Can naughtiness be restored to its rightful and proper place?

And will brussel sprouts and peanut butter ever be taken off the menu?

This gleefully nasty tale of triumph over adversity for the over-sevens is full of worms, horribly clever sound effects of children being chewed up, purple tongues, jokes at the expense of ineffectual adults

And worse - after the troll has eaten little Tommy Anderson his burps smell of the poor child's feet!

Great fun - suitable for all children, young and old

"All of the wit, grotesque humour and naughtiness of Dahl's best" ~ WhatsOnStage

"A celebration of naughtiness and questioning, it's a raucous, skin-crawling treat" ~ Guardian

'[The solution] is a far superior moral twist, one that mocks self-aggrandising authority and finds the value of understanding an alien culture - while giving the production space for pure adrenaline fun all the way' ~ Stage