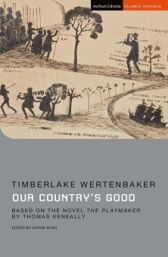 But with only two copies of the text, a cast of convicts, and one leading lady who may be about to be hanged, conditions are hardly ideal . . .

'Rarely has the redemptive, transcendental power of theatre been argued with such eloquence and passion.' Georgina Brown, Independent

This is the Sudent Edition, for the Regular edition, click here