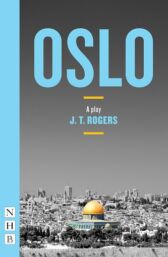 "You have to find the story; you can't just set out to write a play about politics or it would be as boring as hell" ~ J T Rogers

A darkly funny political thriller, which sets a deeply personal story against an epic historical landscape ...

When the Israeli prime minister and the chairman of the Palestine Liberation Organization shook hands on the White House lawn in 1993, the world watched in awe

Oslo tells the true story of the diplomats and politicians from Israel, Palestine, Norway, and America who participated in the behind-the-scenes discussions

Their quiet heroics led to the groundbreaking Oslo Peace Accords

As much a story about people as politics, Oslo casts a bright light on the humans behind the history.

"The stuff of crackling theater. Combining investigative zeal and theatrical imagination with insider access, Oslo invites you into the chambers where the Oslo Accords between Israel and the Palestinian Liberation Organization were forged during nine fraught months in 1993" ~ New York Times