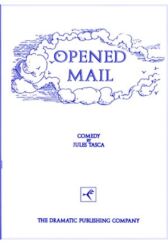 Letters between a jailbird and a naive young girl

Telegrams from Hamlet to his schoolmates in Wittenburg

The characters of "Hansel and Gretel," "Little Red Riding Hood," "Cinderella," and "Snow White" discuss the sexual norms of their fairy tale world

Letters of intrigue between George Washington and his paramour

The Amazing Powers of Eli Frankle

The Seven Ages of Man

Letters between a neurotic mother and her soldier son

A series of letters between Mrs. Muvo and the Center for Creative Genetics