Only Prostitutes Marry in May 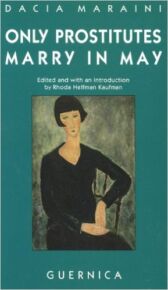 These four plays present Maraini's unabashed and forthright views on the relation between women and power, women and men, women and their own sexuality

Mary Stuart is an evocation of the relationship between Elizabeth I of England and her cousin, Mary Queen of Scots, whom she imprisoned and had put to death. It demonstrates vividly the price that women pay for holding power in a world dominated by men

Dialogue Between a Prostitute and Her Client presents a conversation between a man who seeks solace in the body of a stranger, a stranger who confronts him with the meanings of his search

Dreams of Clytemnestra translates the tale to modern Italy, focussed on a lusty, passionate, practical wife and mother who chooses to stand up to the male chauvinism in modern Italy