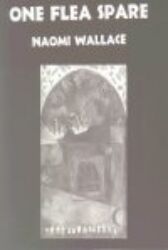 "I sat in a theater at the Humana Festival last year, after the closing monologue of ONE FLEA SPARE, unable to move. I had known Naomi Wallace's work well, having directed an earlier play, and I knew she had tremendous talent and promised to great things. Nothing had prepared me--not my admiration for her plays and for her beautiful, harsh, moving, brilliantly political poetry--for the experience of watching this play, which is in my opinion one of the finest works of dramatic literature written here or in England in the last two decades. Utterly without sentiment but possessed of a very great human heart, ONE FLEA SPARE touches upon many things, class and gender and the pressures of a plague upon internal and external human constructs; and, as I read it, most devastatingly it addresses a tragedy of almost inexpressible dimensions: the consequences of the horrors of biology and Capital on the young. As the play draws to its shattering close I was filled with thoughts of the children of Sarajevo and Rwanda and the slums of America. `Almost' inexpressible except in the hands of a true poet, and Naomi Wallace so magnificently proves herself to be. Her ability to articulate the inarticulable, grief and loss and suffering beyond endurance, is a source of hope; as is the resiliance and passion of the marvelous characters she's assembled. Everyone who loves the theater should read this play. It has made me INTENSELY envious and very full of joy." Tony Kushner

"Naomi Wallace sharply tightens her focus in this latest, thrillingly original work, set for the most part in a virtually bare London room during the Great Plague." Jeremy Kingston, The Times (London)

"Poetic...Naomi Wallace's ONE FLEA SPARE is another example of fine, ambitious writing.... The London plague is evoked in statistics and the overwhelming reality of quirky, Marivaux-like social role reversals in a single room." Michael Coveney, The Observer (London)

"Naomi Wallace makes an opaque but artful and haunting New York debut with her ONE FLEA SPARE.... ONE FLEA SPARE is built to provoke, not to distract, and it doesn't surrender its meanings easily. But the play's powerful sexual subtext and its beautiful poetic surface reveal an original theatrical imagination. Whether Wallace will find a big audience remains to be seen. She has a big talent, though. Wherever her plays are mounted, they're worth finding." John Lahr, The New Yorker