Once Upon A Time in Nazi Occupied Tunisia 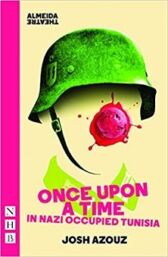 Four months into the Nazi occupation of Tunisia

You're imprisoned in a labour camp

You're buried up to your neck in earth

You're dying of thirst, you miss your wife, and your best friend just pissed on your face

How could things possibly get any worse?

Josh Azouz's Once Upon A Time in Nazi Occupied Tunisia is a brutally comic play about home and identity, marriage and survival, blood and feathers

It was first produced at the Almeida Theatre, London, in August 2021, directed by Eleanor Rhode