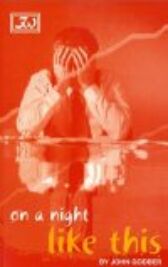 Richard Jackson is middle-aged, middle class and seemingly content with his lot in life ... but all that's about to change as Richard gets more than he bargained for when he gets the decorators in

The two decorators are the small family firm of Danny and Leo Hardy, two die-hard party animals with a devotion to Northern Soul music. So one night when Richard's family are away, his plans for a quiet night in with a Chinese takeaway and a bottle of wine quickly evaporate after a chance meeting in town with Danny, Leo and their respective wives

Suddenly Richard finds himself on a wild and unpredictable night on the town that has both hilarious and disastrous consequences for everyone as beer, infidelity, swinging and Northern Soul combine to make On a Night Like This truly a night to remember!

" ... one of the best Godber plays to date" - Yorkshire Post