Oh Freedom! The Story of the Underground Railroad 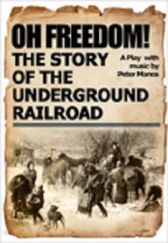 Large Mixed Cast
Before the Civil Rights Movement, the Underground Railroad was the greatest collaboration against racism in American history

Persons of all ethnic backgrounds and of both sexes from North and South came together to resist the oppression of slavery by helping escaped slaves make their way to free territory in the years before the Civil War.

Oh Freedom! The Story of the Underground Railroad celebrates this collaboration combining the stories of the men and women who were active in the fight against slavery with songs of the period

So are lesser known heroes of the movement like ...

John Rankin, whose house on a hill above the Ohio River was a beacon for freedom for many escaping bondage

And the mysterious "Peg Leg" Joe, who moved among the plantations teaching slaves to escape and the song "Follow the Drinking Gourd" designed to show them the way

And Henry "Box" Brown, who had himself put in a box and mailed to freedom by general post!

Oh Freedom! inspires us all to work together for the good of all

It celebrates a time when Americans were at their courageous best, supporting one another, regardless of background, ethnicity or gender