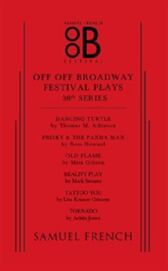 The Samuel French Off Off Broadway Short Play Festival fosters the work of emerging writers, giving them the exposure of publication and representation

When two women from the same town, yet with very different backgrounds, re-connect in the bathroom at their 20th high school reunion, their troubled past breaks the cool veneer of the present. Some scars don't fade away

When a woman runs into her ex-boyfriend in a grocery store, life collides with what really matters

Dancing Turtle invites the audience into the inner life of a girl damaged at birth that is both painful and glorious, as she navigates the first longings of adulthood during a Native American stomp dance at a local Appalachian Festival

Hoping to pick a good team, a man tries to buy his son his first football uniform