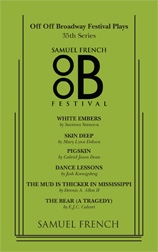 One of Manhattan's most established play festivals, the Samuel French Off Off Broadway Short Play Festival fosters the work of emerging writers, giving them the exposure of publication and representation

From the initial pool of over 850 submissions, these are the six winners ...

Just because it's glitters, doesn't mean it's pretty! Told in mockumentary style through the eyes of six pageant-obsessed women, Skin Deep is a scathing comedy about the world of child beauty pageants

Despite its title, The Bear (A Tragedy) is in fact a Farce. Diane and Everett Feld must negotiate their marriage after the unexpected result of Everett's secret hunting excursions comes to light

The Mud is Thicker in Mississippi by Dennis A. Allen II - M3,F2