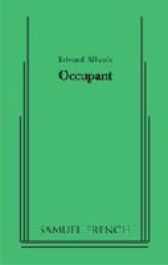 In this Dramatic Comedy, both her public accomplishments and private emotional conflicts are thoroughly examined by an unnamed interviewer who questions the posthumous Nevelson with an unabashed scrutiny

From her unique vantage point beyond the grave, Nevelson answers his queries with a clarity born of the distance provided by death

The result is a touching, humorous, and honest tribute to a woman who was a pioneer for free-thinking females everywhere, but also stood strongly on her own as one of the 20th century's greatest artistic minds

Occupant is a testament of will, internal strength, and the cryptic force that continues to drive great artists

"The play also touches on themes that echo throughout Mr Albee's work - the unreliability of memory, the chimerical nature of language and particularly the alchemical brew of "truth and illusion" (to borrow a much-used pair of words from Who's Afraid of Virginia Woolf? by which people define themselves" ~ The New York Times