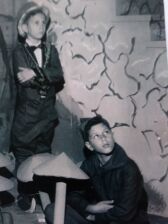 Do they return home safely, get the gold or what?

There is magic, suspense, bravery, fighting, singing, dancing, a hint of romance and much laughter!

O'Bannion's Gold has enjoyed several successful performances and now awaits your own magical touch in a new production!