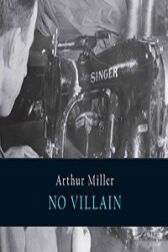 This is Arthur Miller's first play, written for a playwriting competition in 1936 and not performed until 2015

No Villain contains many of the elements that would come to characterise later classics such as All My Sons, The Crucible and most notably of all Death of a Salesman

"Undiscovered early works are not invariably the best predictors of their author's future fame, but No Villain is a remarkable exception" ~ Daily Telegraph