No Place to be Somebody - Pulitzer Prize for Drama 1970 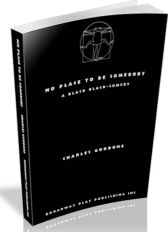 Written over the course of seven years, the play explores racial tensions in a Civil Rights-era story about a black bartender who tries to outsmart a white mobster syndicate

He was the first African American playwright to receive a Pulitzer

"Charles Gordone's No Place to be Somebody seemed to grow in theatrically, raw energy, power and stature ... The denizens of Johnny's bar - like those of Harry Hope's saloon in The Iceman Cometh - are waiting for a fulfillment of their dreams, which are illusions, and in some cases delusions Its humor is full of bile. On one level this was an extraordinarily funny play and it now seems even funnier in the most malicious way No Place to be Somebody is a drama of great force and commitment ... Gordone has a marvelous talent for dialogue, for bitter epithets and insults; for confrontations (each one a striking set piece); for small details that reveal character and for creating whole and vivid characters" ~ Mel Gussow, The New York Times