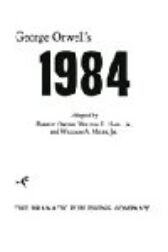 "I do not believe that the kind of society I describe necessarily will arrive, but I believe that something resembling it could arrive. The moral to be drawn from the dangerous nightmare situation is a simple one: Don't let it happen. It depends on you"

Employing a cast of 14, it is intended to be played on a bare stage