Nikolai and the Others 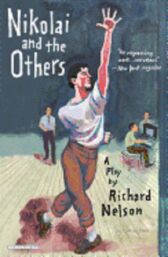 Large Mixed Cast
It's 1948, during a spring weekend in Westport, Connecticut

Nikolai and the Others imagines the relationships between Balanchine and Stravinsky, their friends, lovers, wives and ex-wives, supporters, and dancers (including Maria Tallchief and Nicholas Magallanes), at the time of their historic collaboration on the ballet Orpheus - destined to be the spectacular inaugural production of the newly formed New York City Ballet

" ... summons both a sense of place and displacement with such naturalness that you forget that you're watching titans at play" ~ Ben Brantley, The New York Times

"An engrossing work that transports Chekhov to the threshold of the Cold War ... marvelous" ~ Jesse Green, New York Magazine