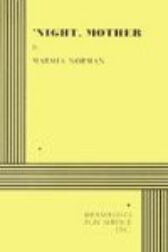 Jessie's father is dead, her loveless marriage has ended in divorce, her absent son is a petty thief, and her last job didn't work out

As the play begins, Jessie asks for her father's service revolver and calmly announces that she intends to kill herself

At first her mother refuses to take her seriously, but as Jessie sets about tidying the house and making lists of things to be looked after, her sense of desperate helplessness begins to build

In the end, with the inexorability of genuine tragedy, she can only stand by, stunned and unbelieving

Winner of the Pulitzer Prize and the Susan Smith Blackburn Prize

"It is sparse and concise, introspective and penetrating, powerful and uncompromising, intense and intelligent, warm and theatrical. It is THE American tragedy" ~ New England Entertainment Digest

"Something I hadn't seen in a long time happened at 'Night, Mother - the audience still sat applauding after the house lights came up, as if waiting for the cast to come round and join them" ~ Village Voice