Next of Kin - An Interactive Murder Mystery Game 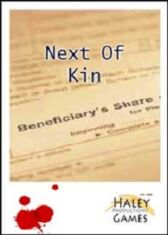 This set on an Estate owned by Hamilton Sugarbaker, a sickly patriarch whose last wish is for his family to gather for what could be their last time together before he passes on

8 PRIMARY SUSPECTS - (they will have full knowledge of the mystery & be given a complete script):

Hamilton "Big Daddy" Sugarbaker - A very, very rich man from Atlanta, Georgia who moved to (your state/county) 6 months ago after the disastrous failure of his second marriage

Bobbie Joe Butler - Hamilton's nurse, confidante, and friend (can be played by a male if necessary)

Ashley Sugarbaker - Hamilton's youngest son. He's a struggling poet - ana a bad one - who's embittered by his lack of success, but who still believes, despite his failures, that he's a true "artiste"

SECONDARY SUSPECTS - (Optional - Remember, EVERYONE will be actively involved in this mystery because it will be their job to solve the case and because you'll be encouraging them to come in costume and in character. Use any and all of these secondary suspects if you have "extra" cast members you want to use. You will NOT give them a script but you will give them a description of their character and let them run with it):

Cornelius Bliss Big Daddy's ex-foreman at his Acme Bottle Capping company in Atlanta. Ex because he was caught doing something he shouldn't have

Wilbur Ernest Fudge - Big Daddy's milkman and witness to his will