New Playwrights - The Best Plays of 2008 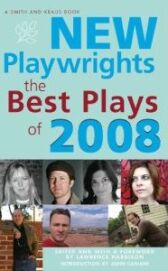 For the 11th volume in this prestigious series, Lawrence Harbison has assembled 2008's best plays by exciting new American playwrights ...

THE BUTCHER OF BARABOO by Marisa Wegrzyn

Off beat dark comedy about a small-town woman whose husband has disappeared under mysterious circumstances and the town thinks she done it. Produced Off Broadway by Second Stage

An out-and-out comedy about a small-town mayoral election. Examines with hilarious dexterity why we vote the way we do. Produced Off Broadway by Second Stage.

Touching, beautifully-written drama about a Texas farmer who has to choose between his farm, which has been in his family for several generations, and his wife, who is fed-up with their hardscrabble existence. When he chooses the farm he loses the love of his life, only to find another years later. Produced Off Broadway on Theatre Row

Extremely inventive drama about a group of suburban teenagers obsessed with on on-line video game set in their neighborhood who cross the thin line between fantasy and reality. A sensation at Actors Theatre of Louisville's famed Humana Festival

100 SAINTS YOU SHOULD KNOW by Kate Fodor

Sensitive drama about a single mom looking for something to believe in and a Catholic priest who has lost his faith. Produced Off Broadway by Playwrights Horizons

An hilarious comic fantasy about a women named Barbara. Her husband has run off with a bimbo and Barbara, who has a thing about Spain, now has an actual 16th Century Spanish conquistador in her living room or so the intruder claims. Produced by MCC Off Broadway at the Lucille Lortel Theatre

Hard-hitting, insightful drama. Leonard balances three disparate stories, the central of which concerns a human resources worker who, enraged by having been laid off after many years on the job and just a short while from retirement and the pension he was counting on takes the guy who let him go hostage. Produced Off Broadway by LaByrinth Theatre Co. at the Public Theater