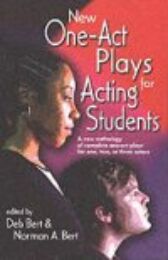 A New Anthology of Complete One-act Plays for One, Two, or Three Actors

This provides roles for almost any mix of students in an acting class, ranging in mood from serious and heavy to dark or satiric comedy to farce

The heart of the book includes fifteen scripts for two actors. Also included are five monologs and five three-character plays

The playwrights are icons of the American avante garde, writers who have contributed much to regional theatre over recent years

The Anthology is divided into Four sections ...

An excellent resource for classrooms and festival competition use