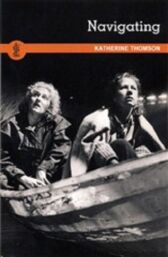 'The only thing necessary for the triumph of evil is for good men to do nothing', observed Edmund Burke. The courage of ordinary people in the face of economic upheaval or public corruption is at the heart of Katherine Thomson's writing. In Navigating we met Bea, an embattled woman who finds herself in possession of damaging documentary evidence. The seaside town in which her and her sister live is riddled with corruption and buried secrets, as the forces once responsible for a holiday tragedy now conspire to win the contract for a private prison. Unwilling to recognise the fear and deceit around her, Bea confides in one hollow friend after another. Her small world crumbles. Silence, she discovers, is as damaging as speech. A dense, powerful, witty human drama which goes to the heart of small-town politics and finds sources of unexpected wisdom.