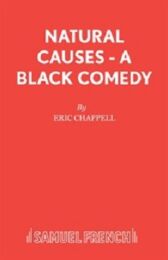 A brilliant black comedy ensues when Vincent, a professional suicide merchant, is contracted by Walter Bryce and arrives at his country house

He mistakenly assumes that the potion is intended for Walter - or maybe for Walter's wife Celia?

If so, then why are all her suicide notes left unsigned?

After several failed attempts at poisoning various characters (resulting in multiple poisoning of a rubber plant!) will Vincent finally succeed in killing anyone ..