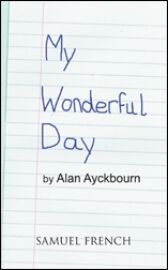 Winnie is nearly nine and the Play is seen through her eyes ...

Her mum, Laverne, is second-generation Afro-Caribbean and heavily pregnant but continues with her cleaning job since her husband left while she dreams of moving the family back to Martinique

Tuesdays are special - Laverne insists that Winnie speaks only French (in preparation for Martinique) and today is Tuesday - not her usual day to clean at the north London house of Kevin Tate, an affluent, bad-tempered, philandering, minor television personality

Not well enough to go to school, Winnie accompanies her mum and settles down to her homework - an essay entitled "My Wonderful Day" Throughout the course of the next few hours, the shy, astute and ever-watchful Winnie will amass plenty of material for her essay as a variety of adults parades before her - Kevin's baby-talking and patronizing mistress, his vengeful wife, and the hungover family friend who pours out his heart believing that Winnie doesn't speak English

But as events reach a frenzied climax, Winnie's essay will speak volumes ...

This hilarious and bitter-sweet classic from Alan Ayckbourn premiered at the Stephen Joseph Theatre, Scarborough before transferring to New York and a UK tour

"Alan Ayckbourn back on blistering form ... and breaking new ground. The play is often blissfully and farcically funny. But there is an ache of sorrow here for children who have to grow up too quickly" ~ Charles Spencer, Daily Telegraph