My Time with Antonioni 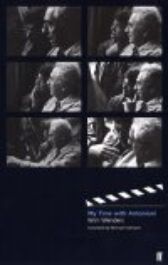 The great Michelangelo Antonioni's directing career was widely considered to be finally curtailed by the effects of a stroke which left him scarcely able to speak. But with the support of committed financiers and fellow professionals, he was able to make Beyond The Clouds (1995), a portmanteau adapted from his short fiction

Wenders, a passionate admirer of Antonioni, agreed to back-stop the production, to direct some linking sequences and to assist Antonioni on the shoot. This book is his journal of that process, in which Wenders writes thoughtfully and frankly about the difficulties of working with such a renowned but physically debilitated maestro