My Life in Pieces - An Alternative Autobiography 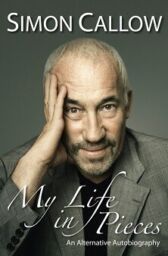 In My Life in Pieces, Simon Callow recaptures the multifarious people, productions and events which have fed into his lifeblood and left their indelible mark

Starting with his first ever visit to the theatre - Peter Pan - he takes us through a somewhat chaotic boyhood in southern Africa and South London, an aborted university career, a testing time at drama school and on to an acting career that has encompassed roles in the West End and stand-out character parts in films such as Four Weddings and a Funeral

Callow writes with his customary perceptiveness, wit and flair about the remarkable people he has encountered in the course of his career - Laurence Olivier, Paul Scofield and Michael Gambon at the National Theatre, then Alec Guinness, John Gielgud, Ralph Richardson, David Hare, Simon Gray and Richard Eyre, among others

This being an alternative autobiography, he also writes about figures he did not meet but whose influence was vital to a full understanding of his craft - figures such as Stanislavsky and Michael Chekhov, Nureyev and Cocteau, Laughton and Welles

There are also other, not-quite-legit performers like Tony Hancock, Tommy Cooper and Frankie Howerd

Also included are accounts of his life as a solo performer, most notably as Charles Dickens

The result is a heartening, instructive and utterly beguiling book which, in tracing Simon Callow’s own ‘sentimental education’, goes to show how rich and nourishing a life can be had in and around the theatre

An alternative autobiography of the well-loved actor and man of the theatre, and winner of the Sheridan Morley Prize for Theatre Biography