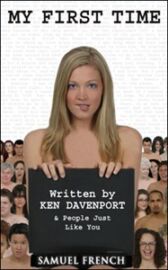 In 1998, a decade before blogging began, a website was created that allowed people to anonymously share their own true stories about their First Times

The website became an instant phenomenon as over 40,000 stories poured in from around the globe that were silly, sweet, absurd, funny, heterosexual, homosexual, shy, sexy and everything in between

And now, these true stories and all of the unique characters in them are brought to life by four actors in this acclaimed 90 minute play

"Funny and touching to sweet, sexy and silly!" ~ The Village Voice