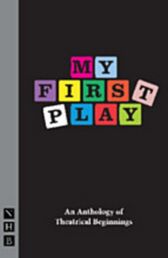 My First Play is a unique collection of pieces by playwrights, actors and theatre directors responding to the simplest of briefs - write about your first play

Candid, hilarious, and often sharply revealing, the resulting pieces many of them written in the hurly-burly of work on a new production combine to prove the power of theatre to entrance us, and hold us captive in its spell

Included here are remarkable first-person accounts from many of our leading playwrights ...

There are also enthralling insights into the first steps in theatre of some of our principal actors and theatre directors ...

Published to celebrate twenty-five years of Nick Hern Books, the royalties from the sale of this magical collection of 66 miniature autobiographies will be donated to the Writers' Guild