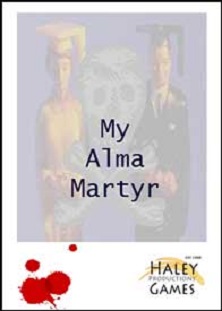 The event is, however, marred by tragedy because one of their alumni, Simon Klint, has recently passed away

EIGHT PRIMARY SUSPECTS - These are the players who will be given a complete script and full knowledge of the mystery ...

SIMON KLINT: He would be attending the reunion, only he's dead. Ask Molly about it. Someone sent her his death certificate if you can believe it. (There will be additional murders during the course of the mystery)

MOLLY SALEM: Your former class president who's organized this reunion. Yup, she and Lana are still best friends and yup, she hates Phineas even more than she did in college

LANA BLUSTER: She's married to Phineas but the true love of her life used to be Frankie. We wonder how she'll feel seeing Frankie again after all these years?

PHINEAS T. BLUSTER: Lana's husband and a big shot surgeon with an ego that's out of this world. It's okay if you don't like him much, no one else does either

FRANKIE McCALL: Once a bad boy, always a bad boy - the kind of bad boy women love (especially Lana). Frankie may be a bad boy but he did have one true love in his life - once a long time ago

GLORIA DOWD: Ah, dear desperate Gloria. A sort of man's man if you will, which is probably why she's still single. Perhaps tonight she'll get lucky in love? She'd do anything to get lucky in love

PEGGY GARFUNKLE: She wanted to be a famous actress. Instead she went on to become a librarian in Fargo, ND which is probably a good thing because she's a bookish, nervous and hysterical woman who's prone to panic attacks

CLIFF CLARENCE: He used to be the number 1 best-selling horror writer in the US. Lately he hasn't been doing so well with his book sales so he's desperate for his next big best-selling story. Perhaps tonight he'll find it

These are optional - remember, EVERYONE will be actively involved in this mystery because it will be their job to solve the case and because you'll be encouraging them to come in costume and in character

Use any or all of these secondary suspects if you have "extra" cast members you want to use. You will NOT give them a script but you will give them a description of their character and let them run with it):

VINNIE - "Mr. Sell'em" Salem & Molly's husband. He LOVES selling any thing that will make a housewife's work easier so she can welcome her man home at the end of the day

KITTY REAGAN - Frankie's date for the evening. A jealous sort so she won't like Lana one bit

POPPY ARTHUR - Gloria's "date" whom she insists is just a friend